What is MIG Welding? 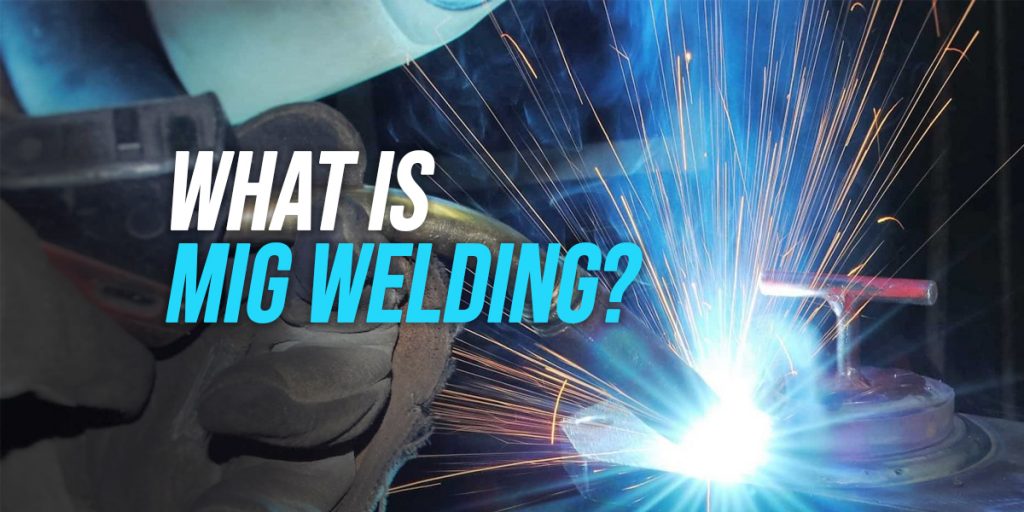 MIG welding is one of the most commonly used welding processes due to its productivity, deposition rates, adaptability for automation, and versatility. All of these are all well and good, but what exactly is MIG welding?

Metal Inert Gas (MIG) welding is an arc welding process for fusing metals. Fusion is achieved by heating the metals using an electric arc formed between the surfaces to be welded and a filler wire electrode. MIG welding uses inert gases to shield the weld pool from reacting with elements in the air.

Continue reading this article if you’d like to learn more about MIG welding, as it covers everything you need to know, including the MIG welding process, equipment, shielding gases, and applications.

When the MIG welder is turned on, an electrical arc forms between the end of a wire electrode and the workpiece (the metal to be welded). The newly formed arc melts the workpiece and the electrode together to create a weld pool.

The wire electrode serves a dual purpose: a heat source to melt the metal and filler metal for the welded joint. The molten metal is called a weld pool, and wire is fed continuously to the pool through a copper tube in the welding gun, which passes the welding current into the wire.

As the weld pool forms, a steady stream of gas is released into the immediate atmosphere through a nozzle surrounding the electrode wire. As stated, the gas serves as a shield to protect the weld pool from reacting with elements in the air, like Oxygen. The type of shielding gas used depends on the type of metal and the application of the welded joint.

MIG welding is frequently referred to as a semi-automatic process. Semi-automatic because the rate at which the wire is fed to the weld pool and the electric arc are both controlled by the machine, while the welder controls the travel speed (how fast you move the weld gun along the joint) and wire positions. However, the process can be entirely mechanized, and in such cases, it’s referred to as an automatic process.

MIG welding is fundamentally an arc welding process, and so voltage and polarity are key players.

The wire is positively charged and connected to a power source with a constant voltage of direct current (DC). The current flows from the negative terminal to the positive, which is the wire.

Since the wire is positively charged, this type of polarity is referred to as DCEP (Direct current, electrode-positive). DCEP is the preferred polarity for MIG welding, as it offers deeper penetration of the weld pool and less splatter.

MIG welding works with a DC power source. The source is a constant voltage source (CV), which means that the voltage will remain at a set level even though the current may fluctuate.

The wire feeder unit, also known as a wire driver, is a crucial component in MIG welding. Its primary purpose is to feed the electrode wire at a constant rate and speed to the welding arc. Other functions of the wire feeder include:

The welding gun or torch is an essential component of the welding equipment — it assembles the welding current, electrode wire, and shielding gas at the workpiece. The gun has several components, including a control switch, gas nozzle, and a contact tip.

You would use the control switch to start and stop the supply of welding current, shielding gas, and electrode wire.

Gas nozzles direct the shielding gas around the weld pool. Bigger nozzles are ideal as they supply sufficient gas to cover the entire weld pool.

The contact tip conducts the welding current to the electrode wire and thus creates the arc. The size determines the diameter of the wire you can use and the amount of filler metal that will enter the weld pool.

The Gas tank houses the shielding gas to be used during welding. They’re available in different sizes.

There are four metal transfer modes for moving metal from the electrode to the weld pool in the MIG welding process. Each method depends on the welding process, power supply, and filler metals. Additionally, each transfer mode has different applications and characteristics.

The four transfer modes are as follows

In the short-circuiting or dip mode, the metal is transferred to the weld pool during repeated electric short circuits. Metal transfer occurs when the electrode wire touches the workpiece or weld pool at a rate between 20 to 200 times per second.

Short-circuiting is a low heat input method of metal transfer, and you can use it for thin and thick metals in all positions. The voltage, wire speeds, and deposition rates of this transfer mode are usually lower than all other metal transfer methods.

One disadvantage of this transfer mode is the possibility of “cold lapping,” or lack of fusion between the weld metal and the parent metal. Lack of fusion happens when there’s not enough heat in the weld, and short-circuiting is a low heat process.

The globular transfer mode is much like an uncontrolled short-circuit/dip mode. It occurs when the voltage and wire are above the dip range but too low for a spray. Large drops of molten metal with diameters greater than that of the electrode are formed and transported to the workpiece by gravity.

Globular transfer mode is used mainly on carbon steel with 100 percent CO2 shielding gas. Its use is limited to the flat and horizontal positions since the droplets are large and affected by gravity if used in the overhead and vertical positions. Additionally, It doesn’t produce a smooth weld bead finish, and substantial spatter is common.

The globular transfer mode is generally regarded as less efficient than other transfers, as it uses large amounts of wire. Despite these, this method offers high wire feed rates and amperage for deeper penetration on thick metals. Another advantage is that it uses inexpensive CO2 shielding gas.

This transfer mode uses high voltages and currents, resulting in a steady stream of tiny droplets of molten metal projected into the weld pool, like how water leaves a hose when the opening is restricted. The droplets are usually smaller than the diameter of the electrode.

In spray transfer, the wire never touches the weld pool or workpiece. As such, there’s no short-circuiting and so very little spatter. Other advantages include high deposition rates, deeper penetration, and good appearance of the weld bead.

Spray transfer can only be used in flat and horizontal positions because it produces a large weld pool.

The pulsed transfer is a modified version of the spray transfer. Here, instead of a single high current, there is an additional low current. The power supply alternates between high and low currents, and metal transfer occurs as single droplets when the current level is high.

Pulsed transfer has excellent wire use efficiency and is the best of all modes of metal transfer, as it has all the benefits of the other modes of transfer while limiting their disadvantages. It doesn’t spatter like the short-circuiting and globular modes, and it can be used in all positions, unlike the globular and spray transfer modes.

As stated earlier in the article, shielding gases are inert or semi-inert gases that prevent the weld pool from reacting with Oxygen and other elements in the air. But this isn’t the only function of shielding gases. Here are some other functions they perform;

So it’s clear to see that shielding gases are an essential part of MIG welding, as they affect the transfer of metal, the penetration depth of the weld, physical and mechanical features of the weld, and the stability of the arc.

The most widely used shielding gases are Argon, Carbon dioxide, Helium, and Oxygen. While these gases can work independently, they are sometimes mixed in different percentages (e.g., 75Ar/25CO2) to form shielding gas blends for various applications.

CO2 is the most commonly used shielding gas. It is also the least expensive. It can be used alone without adding other gases, and when used this way, it produces deep weld penetrations, but increases spatter.

Oxygen is used in small quantities, nine percent or less. It is added to other gases to improve weld fluidity, arc stability, and weld penetration in carbon steel, low alloy steel, and stainless steel. But it isn’t used with aluminum and copper as it causes these weld metals to oxidize.

The table below shows shielding gas mixes for different metals and transfer modes.

The parent or base metal is the one to be welded.

The metal that’s added to the weld pool to create the joint and complete the weld.

The weld pool is the portion of molten metal formed when the parent metal has reached its melting point.

HAZ is the part of the parent metal that gets heated due to welding but doesn’t melt.

The portion of the parent material melted during welding, combined with the filler metal to form the joint.

Metal that has melted and hardened again after welding. If no filler material is added, the weld metal retains the same composition as before.

The weld zone comprises the weld metal and the heat-affected zone.

This is the point where the HAZ meets the weld metal.

Weld penetration or depth of fusion is the distance the fusion line extends to below the surface of the parent metal.

The applications of MIG welding are widespread and varied. They include but aren’t limited to the following;

What Metals Can be MIG Welded

You can use MIG to weld almost every metal. But steel, aluminum, and especially carbon steel are the metals frequently MIG welded.

MIG welding is the most widely used welding process because of its versatility, adaptability, ease of use, and productivity. It’s used for shipbuilding, pipelines, steel structure, and sheet metal welding. But it’s also suitable for beginning welders, as it doesn’t require much technical skill.

Do You Push or Pull When MIG Welding?

Welding Gas: All You Need to Know

Can You Weld Brass To Steel?

How To Break A Weld [Thermal vs Mechanical]

What Is MMA Welding?

Can You Weld Rebar?

Welding Gas: All You Need to Know

Do You Push or Pull When MIG Welding?

What Gas is Used for MIG Welding?

At Welding Watch, our goal is to provide you with the best information on the market. We’re passionate about welding and want to share our knowledge and other bits we learn with people just like us.